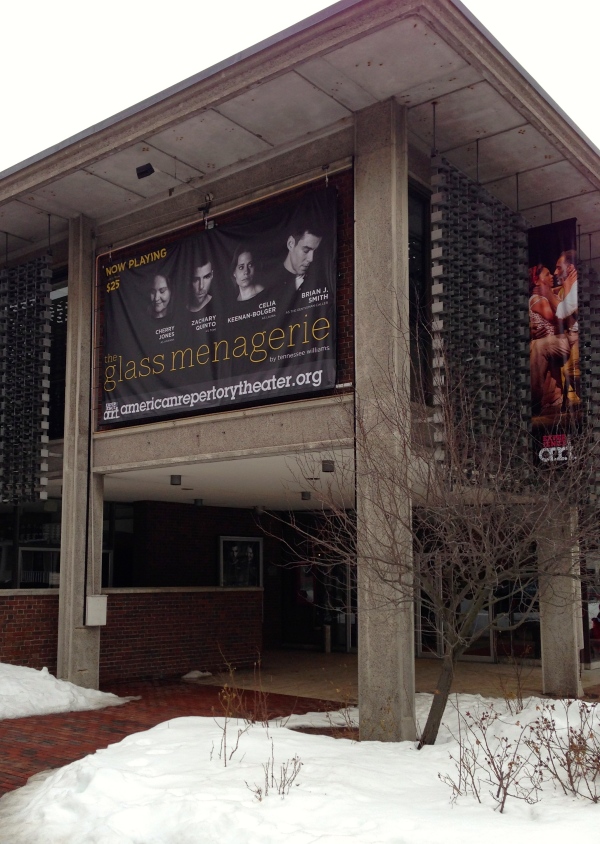 Snowstorms and all manner of events tried to sidetrack my visit to the American Repertory Theater’s production of The Glass Menagerie. After much ado I managed to go with one friend and meet another for a 2pm matinee on a snowy Saturday in February. I am not a theater critic – if you want to read a brilliant review of this play Ben Brantley is your man. I’m writing because it created a moment in my life I won’t soon forget. My memory of the play was of Kate Hepburn’s eccentric and rather monstrous Amanda Wakefield and a kind of over-the-top Streetcar Named Desire-ish play – sort of like watching a deep south train wreck in slow motion. I did not reread it or watch the movie again because I wanted to experience it in as new a way as possible – I knew that Tennessee Williams, Arthur Miller and Eugene O’Neill were all jumbled up in my head and decided I liked it that way. I wanted that trip far into the 20th century where Depression recession and repression could only play out on stage. I went for a glimpse of the past; what I got was a glimpse of the future.

Well. The extraordinary directing, casting, set direction and interpretation of the play made it into something entirely different from what I expected. Cherry Jones portrayed Amanda in a way that showed her as eccentric but primarily a concerned and overwrought single mother of two nearly grown children with vulnerabilities that are all too clear to her. It was a beautifully rendered story that was not played out as it usually is – as a melodrama – but simply as a drama. Funny, poignant, spare, brilliant. It left my heart full, but intact. My companion sat with her hands folded tightly together much of the time, and I knew that the younger child, Laura (a lovely, delicate Celia Keenan-Bolger), was vulnerable in a way that was distinctly familiar to both of us – painfully shy and fixated on her glass menagerie and the music from the victrola. Zach Quinto’s Tom leaves the heaviest subtexts of his character to our own experience and imagination – that his writing is a passion too intense for him to pursue at home and what he escapes to is forbidden in the eyes of Amanda; that is all we need to know. A big surprise for me was Brain J. Smith’s gentleman caller, who comes across more sensitive, earnest and engaging than I ever gave that character credit for. Where once I saw him as obsequious and callous – an Eddie Haskell type or a little creepy, like Michael Moriarty played him  – this performance leaves us knowing that though he may have hurt Laura, he may have helped her, too. We are sorry to see him go but not sorry he came to call.

A word about the set and costumes. Everything is suggested – nothing in this production clobbers you but you are treated to a quiet gasp every now and then by the staging and the props. The dresses, especially, look they are made for paper dolls, with flat surfaces and unfinished trim that give us credit for being able to fill in the details given to us by hands and voices.

It was the talkback afterward that did me in. I thought we were going to hear from the director, but all 4 four cast members strode out in their street clothes and sat a few feet in front of us in the center aisle. I don’t even remember what the question was but Cherry Jones started to speak about her view of Amanda as a single mother, displaced from her deep south home and desperately worried about what is to become of her younger child when she’s gone – how she impresses upon her older child the need to assure the younger is cared for not because she is a monster but because she is deeply anxious and thus sometimes too controlling. And then she said she is sure there are mothers out there whose children are disabled who can empathize with Amanda, and she felt it was important to portray her that way. I lowered my head and was completely overcome. I sat there like a fool, wracked with sobs and wishing to God I had come to see it alone. It was one thing to be aware of the subtext, but to have Cherry Jones spell it out four feet away from me was more than I could bear. I was sandwiched between my two companions in the middle of the row – there was no escape. I remain thoroughly mortified.

If I hadn’t had to drive home I would have headed for the nearest martini. I knew my companions well enough to know that, beyond profuse apologies, we would talk about it later. I stood in the lobby waiting for them to get their coats and I was standing alone when Ms. Jones rushed out to usher family members backstage. I was using the moment to collect myself and when she passed me I looked away. I don’t know if she saw my reaction to her remarks or not but it was pretty hard to miss as I was three rows back but directly in her line of sight when she spoke. Collecting myself took not moments but days. Looking back I can feel the layers of insulation I have built around that afternoon, where so many moments of my life met together in a single room and were voiced by a singular, brilliant actor with a stellar ensemble cast.