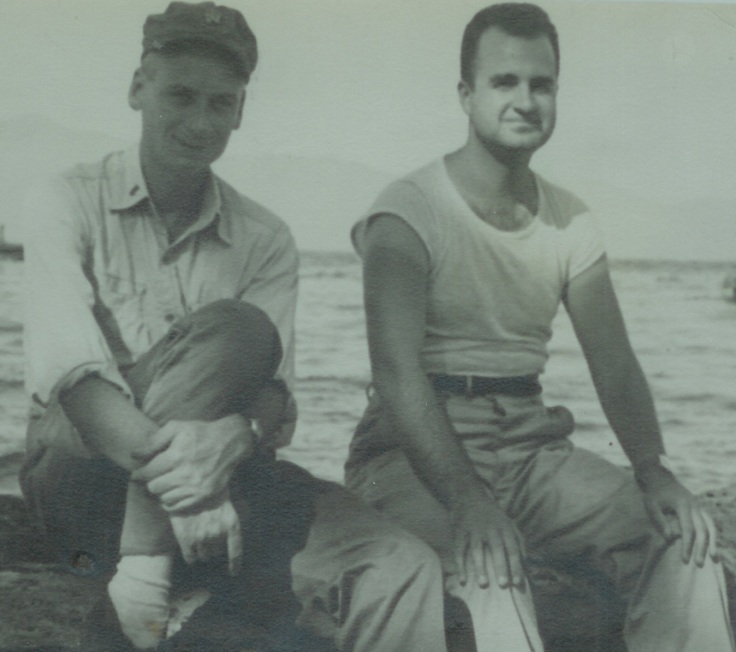 This is our mother’s favorite photograph of our father. She kept it under the glass on her dresser, along with dozens of other photos of her children and grandchildren.  The dresser was several feet long, allowing enough surface area for a single column of photographs depicting each child from infancy to adulthood.  The picture of Dad was in the upper right hand corner and must have been covered by a jewelry box or a lamp, because I don’t recall ever seeing it until she carefully removed it from under the glass to give to me shortly after my father died in 1992.

He is sitting near a beach in a tee shirt, his sloping shoulders, relaxing tanned arms down to hands resting on khaki-clad knees.  He seems happy.  From a distance it is not clear whether he is looking at the camera, and one might surmise that he is looking off in the distance.  But upon closer inspection it is clear that his shadowed eyes fixed on the lens, and that makes his smile seem a little more self conscious, more guarded, but upbeat nonetheless.  It was wartime in the Phillipines, after all.

A few years back Steven Soderbergh directed a film set in World War II (The Good German) which he shot using only cameras, lenses and lighting that were available in 1946.  Soderbergh, spoke in the Times about the use of direct incandescent lighting and the unique, noir-ish quality of the shadows that type of lighting and lens created.  This photograph evokes that style, with deep shadows and warm whites depicting men in manly poses wearing simple, military issue clothing.  The ocean waves behind them provide the only patterns.

Who took the photograph and the identity of the man on the left remains a mystery; my mother didn’t know either, which I find particularly odd.  But it suits his overall story, I suppose, for he was a man with many friends, many stories and a selective memory.  Born and bred in the landlocked Midwest, he left his college career and enlisted in the Navy after Pearl Harbor, and shipped off first to Philadelphia and then to Manila.  I surmise that one of the reasons my mother loved this particular photo is that, besides showing him as he was when they first met, it captures on his face his love of the sea, his joy and satisfaction at being part of something big in a place an Iowa man would never expect to find himself.

But for all of his stories, and his gift for telling them, his war years remained largely a mystery, at least to me.  He watched every WWII documentary, read every book about it, but the only details he shared with us were with maps, showing us the islands he went to, and sometimes the kinds of ships he guided as a harbor pilot.  Some of my siblings, in search of an explanation for the years that followed, theorized that that happened in the war drove him to drink later in his life.  When he lay dying, one of them plucked up all of his courage to ask what happened in the war, what sort of injustices led him to the bottle.  The answer was wholly unsatisfactory.  That was just who he was, he said; there wasn’t a reason, no deep dark secret.  He drank because he liked to, needed to, and he stopped drinking when it stopped helping.  It sounds so simple, so unarguable, when put in those terms.  Even so, there are those that believe he simply was not willing or able to talk about all of his war experiences.   So all we have is the photo hidden in plain sight until it was too late to find out the story behind it. 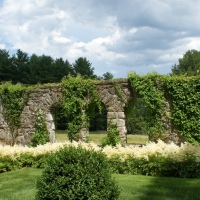